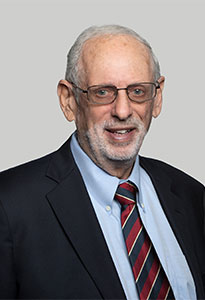 Steven Wimpfheimer graduated Brooklyn Law School in 1966 and served as a Captain in the U.S. Army in Viet Nam after Law School. Steven served as Associate at a Queens law firm and then for 6 years as a Law Assistant and Confidential Law Clerk in Supreme Court, Queens County. He returned to private practice as an Associate at a Nassau law firm. In 1979 he established the Firm of Wimpfheimer & Sherman and has been a sole practitioner since 1993. Steven has concentrated on Tax Certiorari proceedings for his clients in private practice, and also represented the Village of Great Neck Plaza from 1979 to 2022 handling all of the Village’s residential and commercial tax appeals.

Steven has served as President of the Lake Success Jewish Center, Oxford Estates Home Owners Association, Jamaica Lodge, B’Nai Brith, and the Royal Ranch Pool Club. He is on the Kupferberg Holocaust Resource Center Board of Advisors and is a Board member of the Walter Kaner Fund for Children. Currently Vice President of Temple Torah of Little Neck, Steven is a recipient of the B’Nai B’rith Torch of Liberty Award.

Steven is admitted in New York State, US District Court, US Court of Appeals and US Supreme Court.